THE NINTH CONFIGURATION (or its alternate name TWINKLE TWINKLE KILLER KANE) is a hard movie to classify.  It’s starts off as something akin to MASH with a comedic mixture of mental illness and the military then turns into a deeply philosophical series of discussions on the existence of God then turns into a horror movie for awhile then slides into an upbeat ending.
Written and directed by William Peter Blatty (who wrote THE EXORCIST), it’s a one of a kind movie, a truly unique film that features a who’s who of underrated or neglected actors such as Scott Wilson, Stacy Keach (His greatest performance), Jason Miller, Ed Flanders, Richard Lynch
It’s hard for me to go into detail what this film is about because it is complicated and I might reveal spoilers.  However, it is both an inspirational story of one man inspiring others as well as a meditation on violence and the Christ figure taking on other’s sins.
This is one of those virtually unknown movies even by film cultists just waiting to be re-discovered….A unique, fascinating, and powerful film. 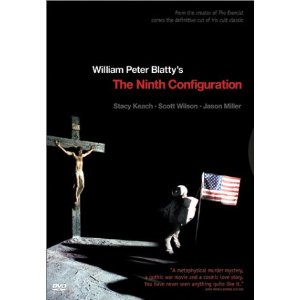 Posted by rgdinmalaysia at 3:23 PM No comments:

REFLECTIONS ON "DEGREE OF GRAY IN PHILLIPSBURG" BY RICHARD HUGO


DEGREE OF GRAY IN PHILLISPBURG by Richard Hugo is a poem that slaps you in the face repeatedly with striking images….Not just well written descriptions, highly visual, that make it easier for the mind to process….Here is an old man returning to a town he lived in some eyars before when he was young the economy of the town was powered by the boom in silver mining.

The town he returns to is dying….No more nightlife fed by the cash from the miners….The town mill, the sole employer, on the verge of collapse….All the pretty girls have left…. The principal supporting business now is rage.

The old man knows he’s not that far from death….He was 20 when the jail was built 50 years ago….However, he’s reminded by an internal voice that things are not that bad-he has a car that runs, he has enough money for lunch, and his food is brought by a pretty waitress.

That is the shade of gray….What is unique or special about this poems is how the sentences run into each other as if from an outpouring of uncontrollable thoughts from the brain like one’s life flashing before their eyes.

Richard Hugo was a “western” poet….That is he is caught up in classification based on where he was from (Washington and Montana)….One critic described his poetry as where the landscape of the mind meets the real physical landscape.

Posted by rgdinmalaysia at 2:18 PM No comments:

SOME THOUGHTS ON THE SAW FILMS....

I haven’t decided yet whether the SAW films are crudely made torture horror porn or a set of brilliant interlocking films on the human conditions (perhaps the best interlocking film series I’ve ever seen).
What I find is I may be turned off by individual acts of violence as they occur in a particular SAW film but I am always left amused or curious or interested at the end….In other words, I’ve never felt disappointed or that I was seeing something with no depth, that was only gratuitous gore at the end of the film.
In this day and age of searching for easy answers, the self-help tough love premise of the SAW films that is John Kramer’s traps provides an often dead on satire….The useless people here can only prove themselves when faced with death or the death of their loved ones or even the deaths of people they hate.
SAW 7 or Saw 3D as it’s also know although the 3D serves no real purpose I can tell, purports to be the last in the series and it does have an air of finality about it….Without giving anything away, the final fate of Hoffman the protagonist of SAW 4,5, and 6 is satisfying.
I liked how in the final movie we actually had a character who attempted to use the Jigsaw murders as the basis for his own self-help book….Too bad he was a phony (and paid the price for that).
What I specifically like about the SAW movies is how well the films fi together….This isn’t FRIDAY THE 13TH or NIGHTMARE ON ELM STREET where a bunch of dumb teenagers get killed in successive films with little to connect them….The intricacy of the plotting as well as the serial nature of the events make the SAW films like one long story instead of individual movies….I still think that the fact the third and fourth movies were basically happening at the same time was a stroke of creative genius.
Is the violence too much?  Well sometimes….I think one of the nastiest scenes I’ve ever seen in a movie was the beginning of SAW 6 when two loan sharks had to cut off bits of their flesh – The one who cut off the most would avoid being killed by the trap.
However, the traps themselves are creative and nasty….Any revulsion is offset by respect for the imagination that went into the construction of it.
What’s my favorite SAW film?  Here’s the order from my favorite to least favorite-3,6,1,7,5,2,4 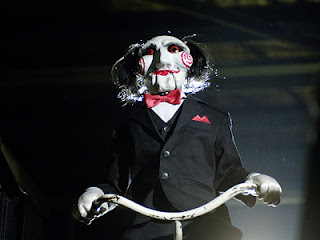 Posted by rgdinmalaysia at 8:32 PM No comments: