To end 2011 on a good note, I will be releasing a new book of poetry in 2011 entitled SOLIDARITY WITH THE FLESH EATING MOSAIC AND OTHER POEMS by Raj Dronamraju.  This is my second book after THE RETURN OF THE MAGNIFICENT NINNY AND OTHER POEMS. 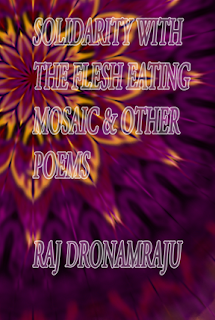 Posted by rgdinmalaysia at 3:46 PM No comments:

THE FOLDED LEAF BY WILLIAM MAXWELL

THE FOLDED LEAF by William Maxwell is not a book that’s subtle despite a blurb on the back describing it as being about a love triangle between two boys who grow up together and a girl they meet in college.
Nothing could be further from the truth.  Actually, the two main characters, Spud who is good at sports and has a bit of an attitude and Lymie who is poor at sports and sickly but excellent at his studies are in a homosexual relationship.
When I say this, I don’t mean that this is implied.  After all this book was written in 1945, when such things were not normally topics for the arts to address.  However, this book describes things in a way that there should be no doubt about the relationship between Spud and Lymie.  It’s amazingly open in that regard.
“He and Lymie were always the first ones to go up to the dorm.  In the big icy cold bed, they clung to each other, shivering like puppies, until the heat of their bodies began to penetrate through the outing flannel of their pajamas and their heavy woolen bathrobes.  Lymie slept on his right side and Spud curled against him, with his fists in the hollow of Lymie’s back”
In a way, this is a distraction as William Maxwell is one of the greatest American writers of the Twentieth Century.  I wrote about him before here  http://rgdinmalaysia.xanga.com/673512456/they-came-like-swallows-by-william-maxwell/
And still feel he is one of the greatest writers people have never heard about.
THE FOLDED LEAF shows all his strengths-An eye for every detail, an ability to shift mood with a minimum of verbiage, an understanding of how characters to really relate and connect to one another.
It’s a great work that doesn’t burden the story with points of high drama rather allowing the story to unfold naturally.  A great editor for other’s people work in his lifetime (as editor of the New Yorker’s fiction page for 40 years which overshadowed his own writing career) his own writing showed the touch of an expert. 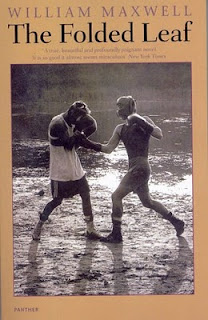 Posted by rgdinmalaysia at 8:52 PM No comments:


Richard Holbrooke who passed away this last week has recived scores of tributes as a great peacemaker and premier diplomat….Most of these are me too people who just want to speak without knowing anything and certainly know nothing of history

For Richard Holbrooke was a graduate of the Kissinger realpolitik school and conducted himself in the same amaoral way….The blood of American cold war crimes (and there is a lot of it) is also on his hands.

This article sums up his history better than I could

Holbrooke was a chief enabler of Indonesian human rights violations against the people of East Timor committed by the Indonesian government.

In March 1977, Holbrooke told Australian diplomat James Dunn that Indonesia’s geographical location and oil wealth were “of considerable strategic importance to the U.S. As we see it,” Holbrooke explained, “the Suharto regime is the best of possible alternatives, and we will do nothing to destabilize it.” In other words, the Carter administration would not support East Timor, but would, instead of “staring down” Indonesia’s dictator, back him—with weapons, financial assistance, and diplomatic cover. Notwithstanding the horrific results of this policy, Holbrooke had the temerity to proclaim in a 1979 prepared statement to Congress that “[t]he welfare of the Timorese people is the major objective of our policy toward East Timor.” (2)

Just as he had lied to Congress in 1979, Holbrooke misled his listeners in Jakarta twenty years later. Indeed, he subsequently openly bragged about burying discussion of East Timor.

Holbrooke’s chief claim to fame was the Dayton Accords which supposedly ended the Bosnian conflict in 1995. The Clinton approach to Bosnia always struck me as closing the barn door after the horses had escaped. Horrible crimes on a massive scale had already been committed and America comes in at the end and pressures the….Bosnian Muslims the people who were mostly the victim of atrocities.

On top of that, Holbrooke was involved in the breaking away of Kosovo from Serbia….Here the US acted quickly and here the US was wrong….Kosovo has turned into a criminal state full of illegal organ transplanters, drug smugglers, and Islamic terrorists.

Couple this with his lifelong support of Israel no matter what they do and his ineptitude in recent years as the Afghanistan envoy and you have a record that shouldn’t make one too proud…. 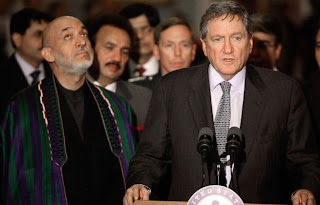 OBAMA'S TAX CUT/UNEMPLOYMENT DEAL SUCKS - IS CLINTON BEHIND IT?

Obama’s tax deal – two year renewal of tax cuts for the wealthiest Americans in exchange for an extension of one year for unemployment benefits- is a bad deal and feels more like capitulation than compromise.
There are several paths Obama can take following the recent election losses in the house and senate….This type of pathetic giving in is the one I had hoped he wouldn’t choose.
In particular, he is now surrounding himself with Clinton people including the big dog himself….This is exactly the kind of something for nothing deal we would expect from Clintonistas who are incrementalists closer in philosophy to the big business wing of the Republican party than to the progressive wing of the Democratic party.
Watching the disgusting spectacle of Bill Clinton hogging yesterday’s press conference….The ultimate fame junkie getting off on his drug of choice, I reached the end of my patience with Obama who is increasingly looking like an empty suit rather than a savior….”Change we’ve been waiting for “is still out there I'm thinking.
Coupled with the administration’s giving up on pushing for a continued settlement freeze in the West Bank and this was a terrible week for Obama….I partly chalk this up to who he chooses to associate with. 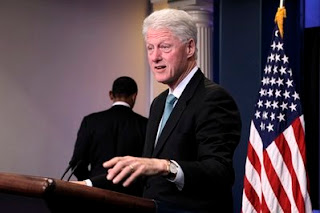 Posted by rgdinmalaysia at 1:07 PM 2 comments: