WHY I SUPPORT THE UNITED NATIONS COALITION INTERVENTION IN LIBYA

I am now opposed to what I wrote earlier. for an update see http://rgdinmalaysia.blogspot.com/2015/02/why-i-was-wrong-about-intervention-in.html

I SUPPORT THE PROCESS – The resistance in Libya requested help from the United Nations which passed Security Council resolution 1973 establishing a No Fly resolution.  This was not a unilateral action and it is interesting to note that Russia and China abstained from voting rather than veto outright.  This is exactly the way something like this should go down pursuant to International law.  It wasn’t even America leading the process but Britain and France.

I SUPPORT THE MISSION – The Security Council authorizes whatever means necessary to maintain the no fly zone.  Those who supported the resolution but don’t support the military action are just nuts.  That would be like putting a burglar alarm in your home but when robbers come and it goes off, the police don’t show up.  I support stopping Quaddafi from killing the rebels as well as any citizens caught in the middle.

I SUPPORT THE LIMITS ON THE MISSION – I don’t in any way support ground troops in Libya.  However both Obama and the resolution itself implicitly are against that.  I don’t think this will become a quagmire because the safeguards are in place.  Plus there is not much stomach for another protracted war in the USA.

The bottom line this is a well defined mission to give the rebels an even playing field.  In the end, Quaddafi will go which will be a good thing for both the Libyan people and the world.  This is not George Bush bullying the UN with phony evidence to launch an imperialistic capitalistic war of America’s choosing this is using the United Nations finally for the goals in which it was intended.  And by the way what about those who say this is about oil?  Libya only provides about 3% of America’s oil imports.  Might have been true in Iraq but not true here.

§  demands the immediate establishment of a ceasefire and a complete end to violence and all attacks against, and abuses of, civilians;
§  imposes a no-fly zone over Libya;
§  authorises all necessary means to protect civilians and civilian-populated areas, except for a "foreign occupation force";
§  strengthens the arms embargo and particularly action against mercenaries, by allowing for forcible inspections of ships and planes;
§  imposes a ban on all Libyan-designated flights;
§  imposes an asset freeze on assets owned by the Libyan authorities, and reaffirms that such assets should be used for the benefit of the Libyan people;
§  extends the travel ban and assets freeze of United Nations Security Council Resolution 1970 to a number of additional individuals and Libyan entities;
§  establishes a panel of experts to monitor and promote sanctions implementation.

Posted by rgdinmalaysia at 11:51 AM 2 comments:

HOUSE OF ALL NATIONS BY CHRISTINA STEAD

At a relatively early point in reading HOUSE OF ALL NATIONS by Christina Stead I gave up on memorizing all of the characters  (there are hundreds of them) aside from the most important ones especially Jules Bertillion, the head of the French bank in the late 1920’s which what the title refers to.
I also lost track of the many different complex financial maneuvers discussed from hiding money in shell companies to setting up dummy businesses to the various stock market transactions
However, neither of these dulled my appreciation for this book- one of the most detailed narratives I’ve ever read spread out over 760 pages.
For this book is also a primer for writers not in the how to sense but more like the scale Everest sense.  That is one human being does something you yourself know it would almost be impossible for you to emulate.
The amount of detail, of meticulously documented scenes between one or 10 people, the frenetic energy, the sprawling narrative, the endless cast of characters make the reader envision a colossal multi-year effort having gone into this book’s writing but Stead apparently wrote this in one year basing it on her experiences working at a  bank in Paris.
What is this book actually about?  Well once I finished it and then tried to organize the cast of thousands in my head, I came to the conclusion that Stead had perfectly described the unstable financial solution epitomized by the bank headed by Bertillion.  Adolph Hitler is mentioned several times by name as a crazy politician in Germany before he is the country’s leader and one gets the feeling that this specific chaos is an indicator of the chaos to come globally.
I also see parallels in what happened in 2008 when the credit bubble burst.  In fact, I can picture some of the characters and situations updated to the present day.
In the end, this book is nothing more than a portrait of a shady financial institution and its head and the many others who either work or have accounts or are otherwise in its orbit.
Christina Stead as I’ve said before in reviews of her books FOR LOVE ALONE http://rgdinmalaysia.blogspot.com/2009/05/for-love-alone-by-christina-stead.html and THE MAN WHO LOVED CHILDREN  http://rgdinmalaysia.xanga.com/649792373/the-man-who-loved-children-by-christina-stead/
is a truly great writer….Her detail, her knowledge of character, of people and their patterns of behavior and her ability to spin a scene are without much competition in literary history.  This is the fourth book I’ve read by her and each one of her books is different in their own way. 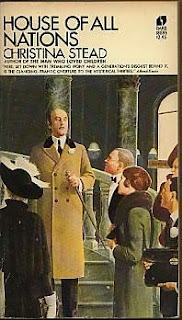 Posted by rgdinmalaysia at 3:53 PM No comments:

PETER KING - HYPOCRITE, XENOPHOBE, AND BIGOT - WHEN WILL HE MEET HIS JOSEPH WELCH?

In 1979, the IRA blew up the yacht of Lord Louis Mountbatten killing him and a number of other innocent people.  He was the last Viceroy to India and an important historical figure in the end of the British Empire.  He was highly romanticized and cast an internationalist figure but was a symbolic target as he really had nothing to do with the ongoing British conflict in Northern Ireland.
This was an act of pure evil blowing up an old man who was an important historical figure.  It would be as if a terrorist group in the US blew up Ralph Nader or Sgt Shriver.
I only bring this up because Xenophobic Islamophobic bigoted New York Congressman Peter King, chairman of the Homeland Security committee in the House of Representatives, is starting hearings this week on Radical Islam in the US.  King is also a big time hypocrite as he was a supporter of the IRA a group that regularly targeted civilians.  He raised money for them, he supported them.  It is no excuse to say there target weren’t Americans and that made it okay.  Britain is our closest ally and that’s just nonsense.
Let’s be clear….Nothing of consequence will come of this.  This will be a federally authorized attack on a religion and on a particular religious community not a review of a real threat.
King has a long history of racist and bigoted statements.  He is the kind of desperate politician who seizes on a hot button issue in an effort to stave off his own being voted out of office as well as using a wedge issue to demagogue.
Joseph McCarthy has apparently seized control of King’s soul.  Let’s hope a Joseph Welch (“At long last sir have you no decency?”) also appears during this disgusting media event. 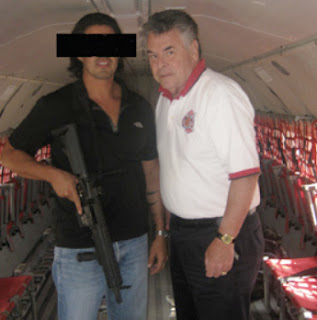 Posted by rgdinmalaysia at 4:54 PM No comments:

THE BENEFITS OF LIVING ABROAD AND HUCKABOOB'S XENOPHOBIA

When I was in the 7th grade, my family moved overseas for a year to live in Pakistan as my mother’s husband worked for the United Nations.  Looking back now, I consider that to have been a good experience.  I ’ve always thought that living abroad in a country you are not originally from is a worthwhile experience as you experience something different from your own culture.
America, in particular, is very insular and has a way of re-enforcing ignorant incorrect beliefs about the world.  Traveling abroad might free one from that.
This in fact was one of the life experiences that President Obama had that I liked when he initially ran for president.  His boyhood years spent in Indonesia were a plus.
Of course, in Dark Ages America heading backwards and starting to resemble Germany in 1933, any sort of connection to what is viewed as different from the “American” experience-what is that exactly? Is met with waves of xenophobia.
Example A ….Mike Huckabee’s comments the other day

http://www.salon.com/news/mike_huckabee/index.html?story=%2Fpolitics%2Fwar_room%2F2011%2F03%2F02%2Fhuckabee_madrasas_kenya
Of course this is Huckaboob’s way of sending code to a right wing base that doesn’t really like or trust him due to his taking some moderate positions when eh was governor of Arkansas on Immigration and and education and taxes.  These comments in my mind disqualify him as a serious candidate for the presidency
Huckabee’s comments are inaccurate as they relate to the facts of Obama’s life, racist, bigoted and dumb and he is a fat useless Gomer Pyle tub of lard who reminds me of one of the man rapists in the movie DELIVERANCE .  “You got a real purty mouth" 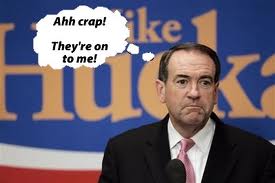 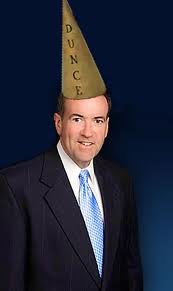 Posted by rgdinmalaysia at 12:25 PM No comments:

MY BROTHER MY EXECUTIONER BY F.SIONIL JOSE

F. Sionil Jose is perhaps the Phillipines most celebrated author.  His reputation largely hinges on The Rosales saga which are five books about the fortunes of different members of a somewhat affluent family with the backdrop of Post WWII Philippines-the injustice, rebellions, and financial inequality.
I’ve just finished reading MY BROTHER, MY EXECUTIONER which is the second book I’ve read in the saga, THE PRETENDERS being the first.  The main character Luis is the bastard son of a wealthy landowner and former maid.  He starts life with his mother in village poverty and then is brought to a life in wealth with his father.  The tug of war between the two lifestyles is at the heart of this book.  The wealthy life of the landowner vs. the grinding poverty and the rebellion against the unfair state of things as embodied by Luis’ half brother the revolutionary Victor.
Jose maintains a focus on this theme but does flirt with other themes including the role of the Catholic Church in Pilipino society and female sexuality in that society as well.  His eventual sacking from his job as a magazine editor due to his reporting of the destruction of his mother’s village by government troops is another key point.
F. Sionil Jose’s writing style reminds me of a slightly less nihilistic and more relaxed Zola. The fate of Luis at the end is partly his own fault.
THE PRETENDERS was a “bigger” novel but I prefer BROTHER.  Luis is a perfectly rounded character and his turmoil and confusion are expertly explained in full.  Jose is brilliant at constructing a scene, describing its inner works and what is going on. 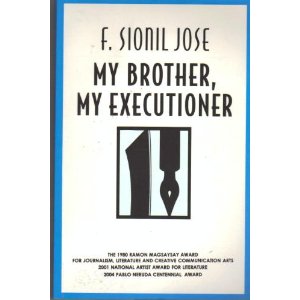 Posted by rgdinmalaysia at 11:45 AM 2 comments: