I am currently attempting to finish a book of short stories I am writing entitled STORIES OF EXTREME WRETCHEDNESS as well as other odd and ends in my life....

So I'm temporarily going to stop blogging but hope to be back soon....
Posted by rgdinmalaysia at 10:31 AM 1 comment:

THE FILM WHITE RIBBON AND AMERICA

The film WHITE RIBBON by Michael Haneke which I saw recently is a powerful yet understated account of a series of bizarre violent events that occur in a small German village on the eve of World War I….Th town is a cruel patriarchy ruled by three men….

The Baron who represents corporatism….He is uncaring about the death of a female worker due to negligence in his plants (the floorboards were rotted on an upper floor and she fell to her death) Later when one of the dead woman’s sons vandalizes a cabbage field out of anger….He fires the whole family and prevents them from working leading the father to commit suicide

The Pastor who represents religious hypocrisy….He beats his kids for being late and ties up his pubescent son’s hands at night to prevent him from masturbating….At the end, when the school teacher hero tells him of his suspicions that the kids of the village (including the pastor’s own) are behind everything, the pastor refuses to listen and threatens him if he tells anyone else.

The Doctor who represents male dominance….He molests his own daughter and treats his mistress very badly as well.

Of course, what this is really about is how Germany could produce a generation of people who would be Nazis….This environment of cruelty, hypocrisy, injustice, and barely repressed violence is exactly the breeding ground for recent German history as the narrator alludes to in the beginning.

But I thought of the US when I saw this movie….We have corporatists who care nothing about working people but only about concentrating wealth in the hands of board members….We have religious hypocrites who are going all out to prevent gay marriage but could care less when the US bombs other countries killing scores not to mention Israeli actions in the Gaza Strip….We have an overly sexualized society that has created a sense of frustration and amorality….How else to explain the pied piper to the dumb Sarah Palin being held up as the role model for the new right?

WHITE RIBBON is a great film and watching it I think America is at a crossroads….When the discussion of a more just and humane health care system and the extremely modest changes that were made is met with verbal bricks thrown such as the word “socialist” used as a pejorative, it shows the circle of cruelty in everyday life in America….I’m talking here about small town red state America with the added difference of kids who are exposed to everything and experience everything at a young age….If America doesn’t watch out, some of these children who don’t seem to understand the simplest concepts of morality and led by the Palins and Becks and Limbaughs of the world could take part in a very dark American fascist future….

Posted by rgdinmalaysia at 6:16 PM No comments:

American foreign policy is like a snake that bites its own tail….The unipolar world has not given the world any sense of peace and security and this is partly due to the US’s own actions.

This video released today by Wikileaks showing a helicopter gunship In Iraq opening fire on a group of men which included two journalists is shocking not for the violence which seems strangely removed (I’ll get to that in a moment) but for the callousness of the military personnel whose comments you can hear as events happen….If it hasn’t been clear in the last seven years, it should be really clear now that the Iraq War is self-defeating.

For one thing, the type of warfare employed in Iraq and also Afghanistan often involves violence occurring at a distance unlike past conflict like the Vietnam War where combatants did have to fight face to face….This is video game warfare without all the messy blood and guts….This has been good for US troops who are probably in better mental shape than their Vietnam forbearers.

However, this creates a removal from death and killing especially of civilians that leads to carelessness about minimizing civilian casualties….This has been the case in Iraq and Afghanistan.

It is clear that despite the election of a president who on the surface seems to represent an understanding that the USA must do a better job of not seeming like crusader imperialists (even though to be honest they are), the American military is a hydra creating multiple potential combatants every time it kills innocent people....This is also true about the behavior of military contractors such as Blackwater.

There are other stories of US atrocities brewing currently that could be worse than this….The one in Afghanistan that led to several women with their hands bound, one of whom was pregnant, shot during a night raid and then the bullets dug out by US forces is particularly troubling.

It’s clear that president Obama needs to not only honor his campaign promise to get the troops out of Iraq but he also needs to change the strategy in Afghanistan and start bringing home the troop from there was well….That’s an unwinnable war but that’s a whole other post.
Posted by rgdinmalaysia at 2:35 PM No comments:

OF PHOEBE PRINCE AND KEVIN CARTER

I have a feeling that the story of Phoebe Prince who was allegedly cyberbullied to death is a lot more complicated than originally portrayed…. http://www.theatlantic.com/national/archive/2010/03/bullying-and-the-phoebe-prince-case/38221/


Now I was bullied myself in Junior High made fun of every day as I lived in a rural area of the US because of my half-Indian descent….I’m not in any way demeaning what this girl went through.

This story was first described this way “Irish girl comes to the US, Irish girl is bullied in the US both in school and online, Irish girl commits suicide”….However, when the alleged bullies were charged with a crime, statutory rape was one of the charges against the two male members of the bully squad. Okay, this means they both had sex with Phoebe Prince but it was consensual otherwise they would have been charged with just plain rape….Suddenly this whole situation becomes a lot more complicated.

I have some questions….Everybody is now getting very angry about this but where were the parents when a fifteen year old girl was having sex with two guys? It doesn’t surprise that they didn’t know she was suicidal when they didn’t about what she was doing.

Did she intrude or on any other way interfere with existing relationships between the guys and the girls who bullied her? In other words did she steal their men?

There was originally a lot of anger towards the bullies….They are now facing serious charges….The anger has now moved on to school officials….This is exactly where it should go next in my opinion….Why didn’t they do anything?....It has been proven they knew what was going (both teachers and administrative personnel)….I can tell form my own story that school only want peace and they don’t want to interfere in these type of situations unless forced especially if it involves athletes and popular kids….US School are like prisons in that regard.

For some reason, this story brought to mind that of Kevin Carter, the Pulitzer Prize winning photographer who took this photo while covering starvation in Somalia and then shortly after the winning the prize for it committed suicide.

The story that has become the public canon is that Carter committed suicide because he was viewed as a ghoul and criticized for not doing more for helping the starving girl in the photo….In fact, Carter did much to publicize the starvation situation in Somalia and before that fought Apartheid in his native South Africa….He was more of a hero than a villain.

Truth is according to at least two biographies of Carter his problem was drug abuse as well as all the violence he’d seen in all the different hot spots he’d covered as a photojournalist….The truth is a slippery thing unless you hold on tight and ask a lot of questions, it can get away from you very fast.

PLEASANTLY SURPRISED BY THE INLAND TAX REVENUE BOARD

Coming from the US, I must admit I don’t have a good opinion of tax gathering bodies….The IRS has been vilified in the USA and justifiably so as they behave in a heavy handed manner and can’t seem to make the proper determination in regards to severity when dealing with individual tax issues….I’m not looking forward to dealing with them if I ever go back to the USA.

Since coming to Malaysia, I have dealt with the Inland Revenue Board (as it’s called here)only by mail or through my past employers….This was the first year that I have had to go in to a tax office to figure out how much I owe as I changed jobs at the end of last year.

While Malaysia has greatly improved its government services over the years I’ve been here and by improved I’m talking about the immigration department which really has gone from a third world nightmare to a decently run agency with set rules and regulations, I still didn’t expect much from the tax department.

However, I was pleasantly surprised….I was led into a room of computers where a Malay gentleman who spoke very good English helped me find my account on-line through the E filing system and set it up correctly with a password….Within fifteen minutes, everything was completed….Not only did I not owe anything for 2009, I was due back a refund which will be coming to me in 30 days.

The service was really, really good….I’ve always said that two of the biggest factors that stop Malaysia from competing in the global marketplace are customer service and corruption….My recent experiences in immigration have also been very positive….Malaysia’s on the right track I think. 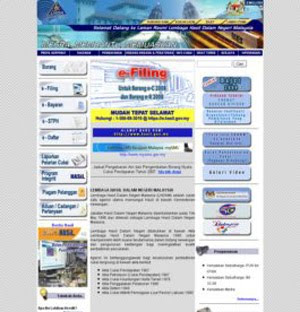 Posted by rgdinmalaysia at 3:17 PM No comments: