ANALYZING MY INDIFFERENCE TO PET SOUNDS

I just want to be clear that it’s me not PET SOUNDS.  It is a superbly recorded record and I’ve owned two copies of it; one on vinyl and one on CD although I don’t currently own a copy.
However, I’ve never had the intense feelings towards this records that many fans and rock critics do.  It’s a pleasant enough pop album with incredible arrangements but something about it has always left me cold.
When discussing PET SOUNDS, it’s impossible not to also mention SGT PEPPER’S LONELY HEARTS CLUB BAND by The Beatles.  The Beatles earlier album REVOLVER was highly influential on Brian Wilson as he recorded PET SPOUNDS and correspondingly PET SOUNDS was highly influential on The Beatles when they recorded SGT PEPPER.
Both albums share orchestration and beautiful vocals but SGT PEPPER is a whole other level of insight when it comes to the songwriting and therein lies the problem.  SGT PEPPER is a record that could be turned back on the world like a mirror-the characters there are people that may exist and their thoughts and the images in the songs are also very real.
PET SOUNDS, despite all its warm sounds-harmonies, strings, percussion etc. is at its heart a chilly record.  You can feel The Beatles heart, their passion in everything on SGT Pepper.  PET SOUNDS is more about pushing the limits of the studio as far as they will go.  The songs themselves are not that much different from what they did earlier-girl problems, the Pacific Ocean etc. they just sound better but in the end I can’t relate to it the way I relate to SGT PEPPER and other music I enjoy.  It’s all about the craft rather than the heart.
I should acknowledge the exception is my favorite Beach Boys song of all time which ends PET SOUNDS – “I Wasn’t Made For These Times” A beautiful and powerful statement and perhaps Brian Wilson’s signature song. 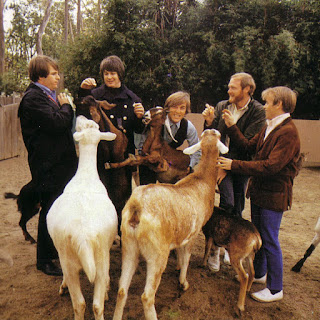 Posted by rgdinmalaysia at 5:32 PM

I guess I disagree. Wilson showed "softness" in earlier songs but here he lets down his guard and says, "I'm a big, weak mess." That was a really weird statement for rock and roll. It won him a lot of suffering fans, and it lost him a lot of his "Barbara Ann" crowd.