ON SEXUAL HARASSMENT - CLARENCE THOMAS THEN AND HERMAN CAIN NOW

I must admit that in the summer of 1991 when the confirmation hearings of Clarence Thomas took a dramatic turn following accusations of sexual harassment, I believed the accused over the accuser.
It wasn’t that I didn’t find Anita Hill credible as a witness.  It was more the lack of corroborating evidence (both witnesses and other women who had been harassed by Thomas) as well as her continued association with Thomas after he had first crossed the line.
I also was offended by the link made between Thomas, a single man at the time, and his viewing of pornographic films.  If watching a pornographic video made one automatically a sexual harasser then every man in a developed country would be out propositioning and annoying women.
However, there has been a lot of information brought out in the years since the hearings and Thomas’s elevation to the Supreme Court (Much of it hidden or neglected during the original hearings).  There were other women who the senate chose not to hear from who could confirm Thomas’s behavior as well as confirm that Hill told people about Thomas’s treatment of her.  In addition, Thomas interest in porn wasn’t the common variety man/woman stuff but his tastes were more perverse leaning towards bestiality among other kinks.  We have learned a lot about sexual harassment since then and Thomas fits many of the standard patterns of the textbook harasser.
I, 20 years later, now believe that Anita Hill likely told the truth.  Much of Thomas’s career is built on fraud especially how much of a big role affirmative action played in his rise and which he consequently has tried to eliminate for anyone else coming after him.  As far as his performance as a Supreme Court Justice goes, I feel he’s been a sub-par justice and a corporate stooge
At this time, there is nothing close to the amount of information that was out on Hill-Thomas about the sexual harassment charges leveled at Herman Cain.  Apparently, the National Restaurant Association which he was CEO for in the mid 90’s settled at least two different harassment claims by two different women with cash payouts (which also stipulated confidentiality).
I think Herman Cain is a narcissistic boob- A vanity candidate running for the presidency to increase his asking price as a public speaker and to get a talk show on the Fox News Channel.  It’s only the self-immolation of Rick Perry and the lack of any other serious conservative alternative to Mitt Romney that has elevated him to a higher position as a candidate.
Cain is almost totally ignorant of anything outside finance and even there his 999 tax plan is regressive and would increase the tax burden on the working poor and middle class.  It’s a great deal for the superwealthy though.
I’ll be waiting to see if there’s fire as well as smoke here.  I do believe that sexual harassment is pattern based-that is a person who uses their position to harass a subordinate or other employee will continue this behavior until dealt with so if Cain is really guilty of this then more stories of those subjected to this harassment should be forthcoming. 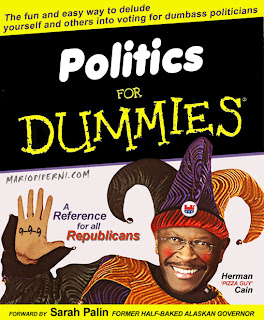 Posted by rgdinmalaysia at 6:55 PM